BANG. And that was it. Piercing right through his heart, perfectly that is. As the force from the shot combined with his intense running, it almost propelled him. His body for a brief, fleeting moment almost flying, levitating before he inevitably hits back onto the ground. Mercilessly colliding with it as his skin gets damaged bit by bit. His fate is sealed. No one can help him. Not his mother, not his father, not his brother, his sister… life is cruel. It was all a mistake, a misunderstanding. A complicated one. One that no mere explanation could ever have fixed or resolved. One that, if you think about it, could not have ever happened if one… single… thing could have changed. Say, maybe he just never woke up and could still be sound in his bed, or if he had just said no to his friends. Maybe even just stopping like the officer said. Oh well, he only has a few minutes to live anyway. Don’t get me wrong, they stole private property. They were willingly and consciously committing a crime. They ran because they didn’t care for the greater system. The one that left them in the dark in the first place. What role does consequences play in determining what we do? How about guilt? Which one takes precedence especially in the critical, small moments like these? As Huey P. Newton was witnessing the violent insurrection that followed Matthew Johnson’s incident. What with the people infuriated, the police overwhelmed, and especially (most importantly) the feeling of safety throughout the community robbed, he might have thought about those questions. He was a part of the first generation of his family that was born on the West Coast. A family that tried to find jobs North and West during the Second World War. Some might even call it a Second Great Migration. That was a lie, everyone called it that because that’s what it was called. That is what happened. And you can sure as hell bet that the Newtons and the rest of the Black folk that were exercising their rights; their freedoms were not given a welcome basket by their new white neighbors. Was their would-be neighbors evacuating? Who knows. All we really know is that they moved. Piled into a new place called the suburbs.

“Anyways, Bobby! Are you listening to me? I swear to god I had an epiphany!” He told Bobby Seale. Great friends. Met back in ‘62 back at College.

“The police man! I mean look at them! They suck and our communities, the people that we grew up with in the ghetto, hate them… Man there are so many Black Power organizations out there but we never end up hearing any true justice that they bring. There is so much opportunity from this social anger. Our brothers on the block need a leader, an organization. We need to channel that into political power. Real change!” There was a brief pause.

“We need guns! They have guns. We need to even it out.” He snaps his fingers.

“Even better, police the police.” He was pacing back and forth now. Bobby interrupts.

“Whoa, hold up now how is this going to help anyone? At college we learned first and foremost that talking, arguing, debating is safe, useful, and most importantly efficient.”

“No point in arguing when the other side doesn’t respect our humanity.” Newton added.

“This just sounds like antagonizing an agency that has literally the world’s strongest military behind its back.” Bobby tried to convey to Huey.

And that was it. For months Huey dove through the California gun laws. Trying to see if they can pull off their militia. Militia for the people. Eventually he figured out how to create patrols that monitored the police.

Huey and Bobby needed money. They needed it badly. So, like any smart entrepreneurs they looked where there was supply, and where there was demand. Bobby figured out a solution for that: “sell the books, make the money, buy the guns, and go on the streets with the guns. We’ll protect a mother, protect a brother, and protect the community from the racist cops.” Buying bulk copies of the Little Red Book and selling them for triple the price to the leftist and liberal college students on the Berkley campus.

After the profits started rolling in for the boys, they bought two shotguns. Next step: round up the homies. We’ve got Big Man Elbert Howard, a former Air Force soldier; Sherwin Forte and Reggie Forte, the brothers know more in activism than the entire group; and Little Bobby Hutton, 16 year old and the first official recruit, dude’s good at math. Just one more thing missing… I can’t put my finger on it.

“The Black Panther man! Check out how cool this symbol is. The Lowdy County Freedom Organization will be using this. You should definitely join.” Stokely said. Stokely Carmichael, a leader of the SNCC. Came around down to Berkley to give a talk about his organizations and what he does.

“Alright man, I love the ‘Black Power’ thing you’ve got going on there.” Heuy responded with.

“Yeah, but we’ll be trying to do stuff for our Black brethren back here at home.” Bobby added.

“Alright man! Do your thing.” Stokley said as he went up to another person at the conference with the same thing to say.

Things started escalating from there. Patrols began. Members joined. Bigger and bigger demonstrations started at more and more prominent and political places. And America watched. Learned. Reacted. Supported. Hated. Loved. And inevitably put an end to it. For better or for worse. It’s hard to bring full circle how a group of juvenile teenagers messing around ended up leading up to something so close to threatening the system of racism. But that’s just how life works. 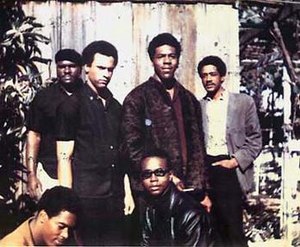 Check Out Some Other Stories

"The world outside my window is much more than what I can see."

Outside my window and over a distant hill, the sun rises… a lazy, shining eye awakening to a dark world. A...

"No one talks about what happened in the Lands. Every time I see someone else like me: trying to look..."